Hiking into the mountains can be compared to going forward in time. Â As you gainÂ elevation into the hills it is like moving forward in the season.Â  Lower pressures and colder temperatures bring an earlier onset of each season and in mid-October it is not uncommon to fall asleep in autumn and wake up in winter. Â Such was the case this past weekendÂ at a high alpine camp I made on the East side of the Gallatin Range. 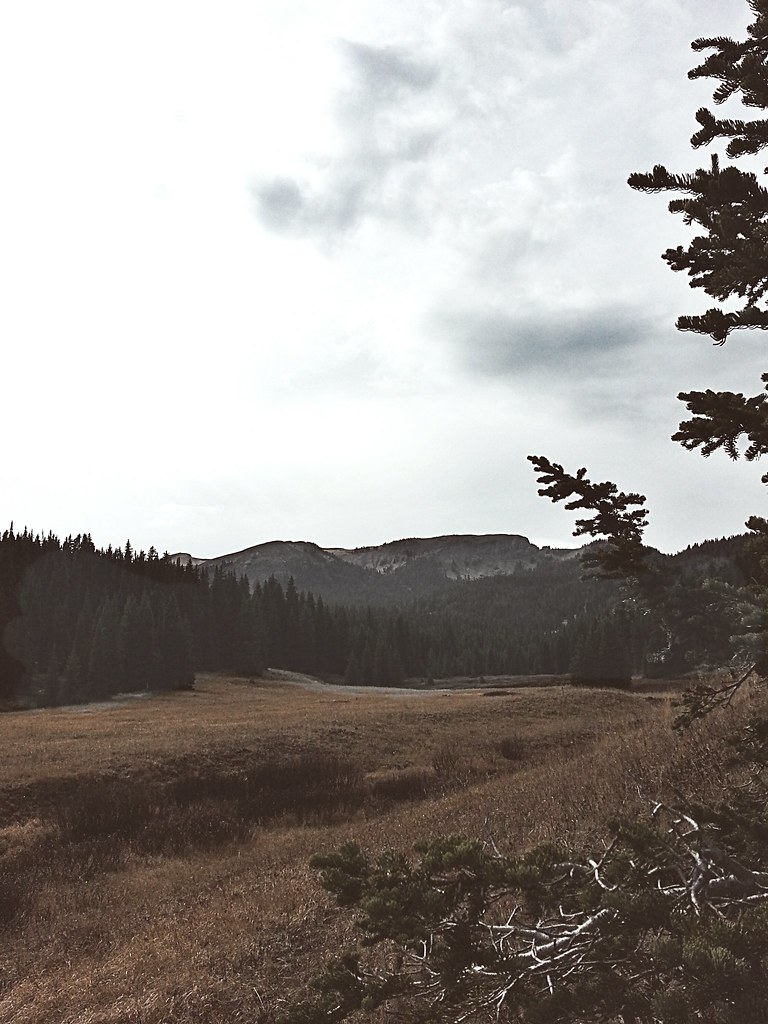 I am prepping for the upcoming deer hunting season and in keeping with due diligence I have been scouting possible zones where I hope to be successful in my hunt. I opted to gain a high alpine ridge via a trail, then make my way off the trail along the ridgeline to provide me a view to glass into multiple adjacent basins. I camped on a narrow, flat section of this ridgeline below a beautiful rocky peak. Although windy, if I had not researched the weather forecast the onslaught of snow that was to come could have been a near total surprise. 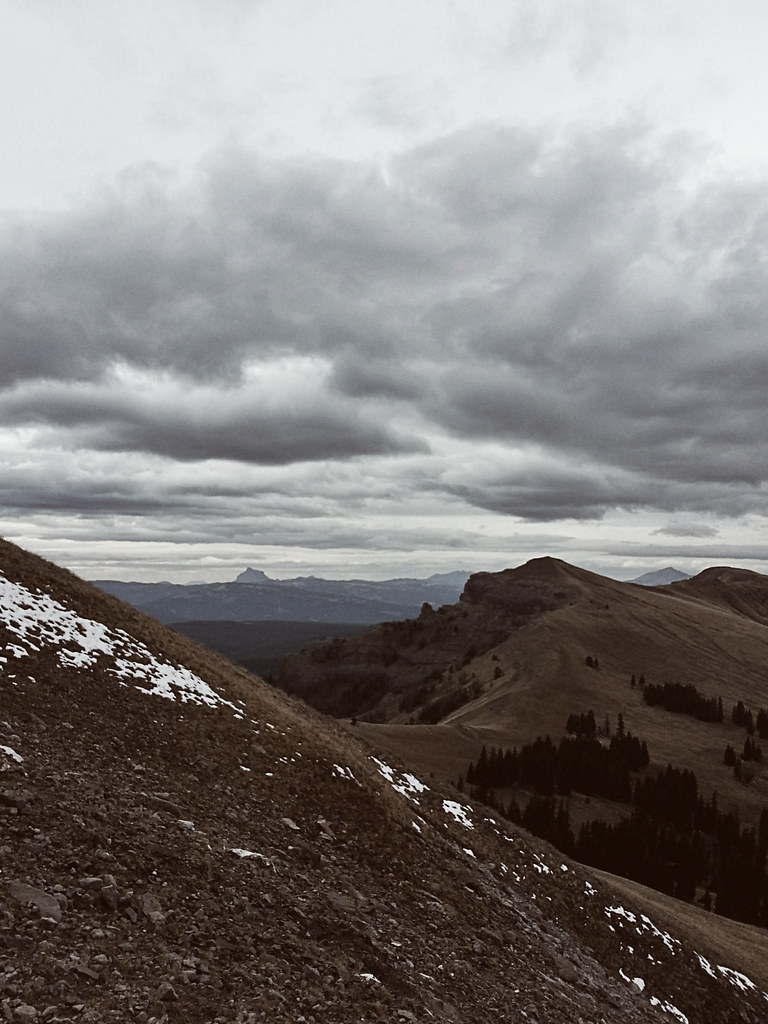 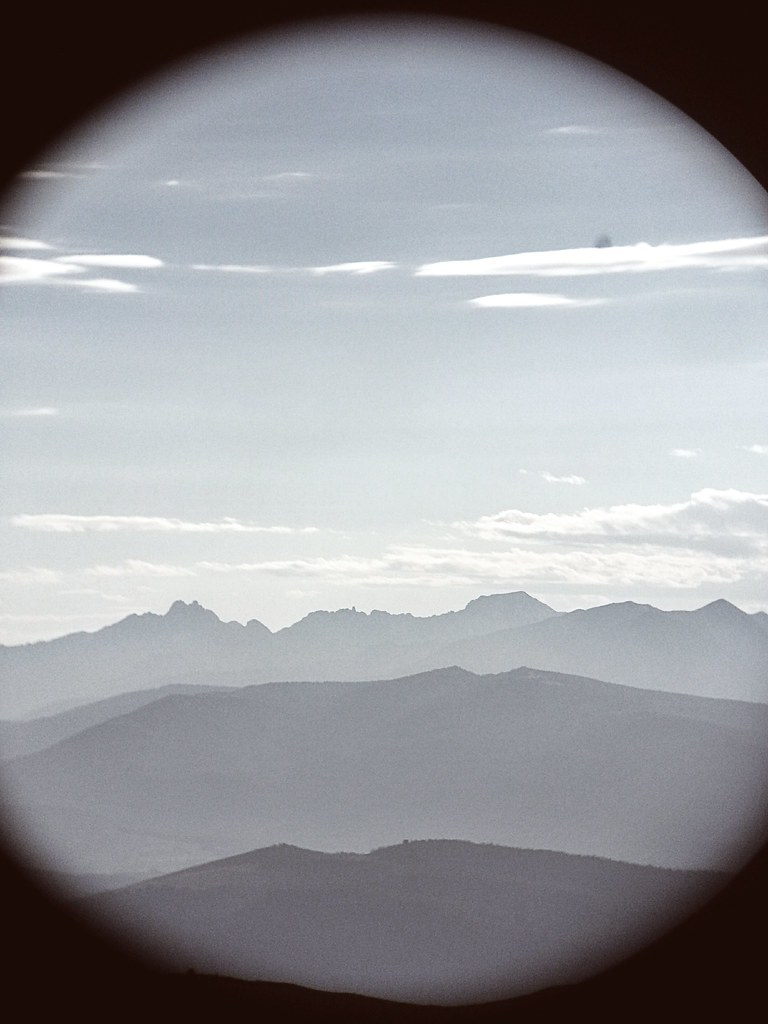 I arrived in the late afternoon, draped myself in my woobie and poncho atop my foam sit pad with snacks, water, and binocular to glass the basins below. Unfortunately into the lens appeared two other groups of hunters and no wildlife. The wind picked up so excessively that I quit glassing as the light faded and set about cutting enough firewood to warm me until darkness and a reasonable bedtime. 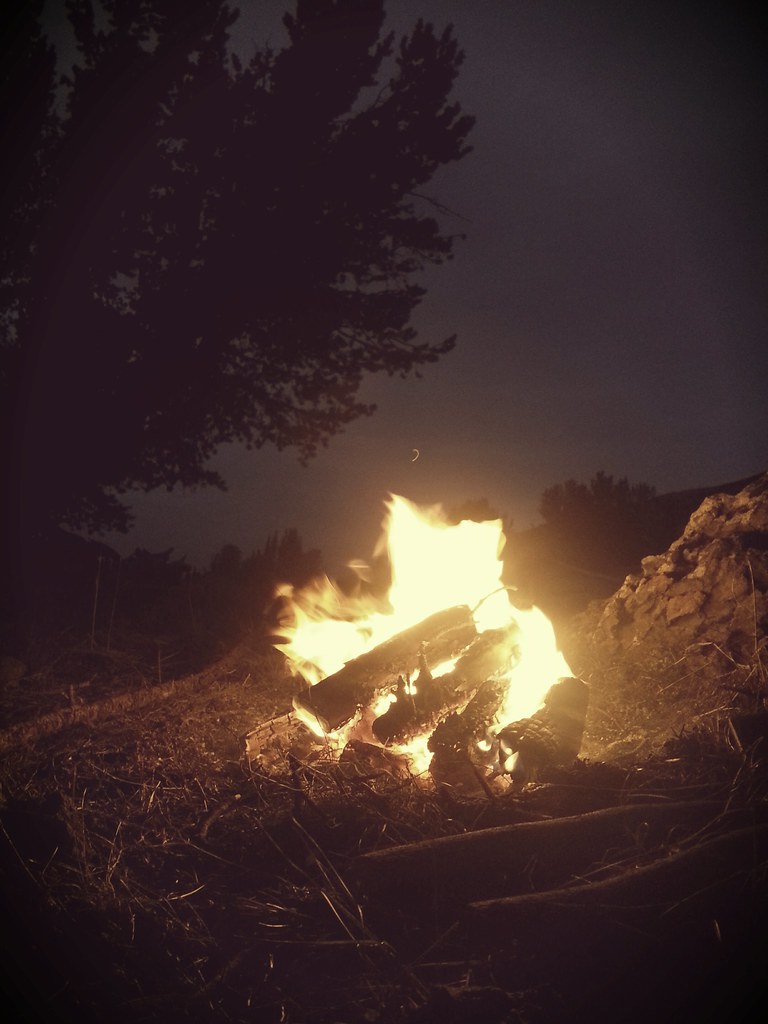 Mashed potatoes and a few slugs of bourbon in my belly, the dying embers of the fire, and the first flakes of falling snow pushed me into the warmth of my sleeping quilt inside my shelter. I had brought a snow-load worthy shelter but little did I know what kind of pummeling my ridgetop camp was to bring that night. The snow came in hard and the wind maintained itself until well into the night. I awoke many times to re-adjust a blown out tent stake and the trekking poles which hold up the shelters roof. The snow was still falling when I awoke before dawn with the intent to continue glassing for wildlife. The shelter walls sagged and caved but the roof remained strong. 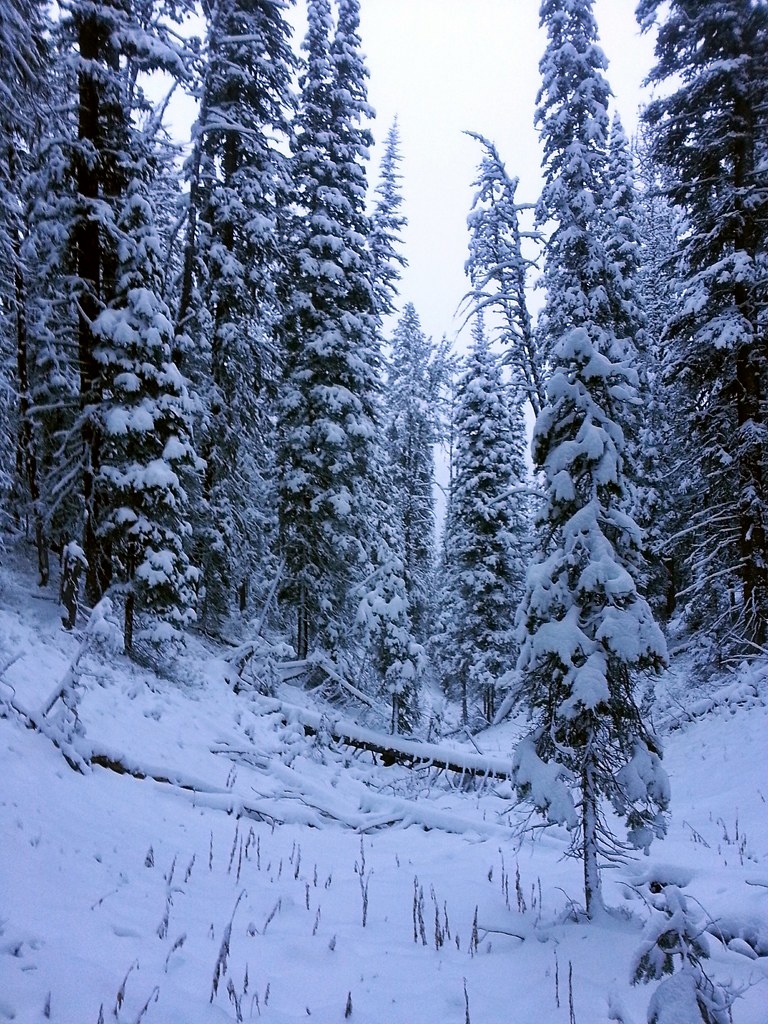 When dawn broke the visibility outside was such that glassing from the ridge was not going to provide results so I struck camp and decided to hike out via an offtrail route following the ridge I was on to see what sign of animal I could find while making my way back to the truck. 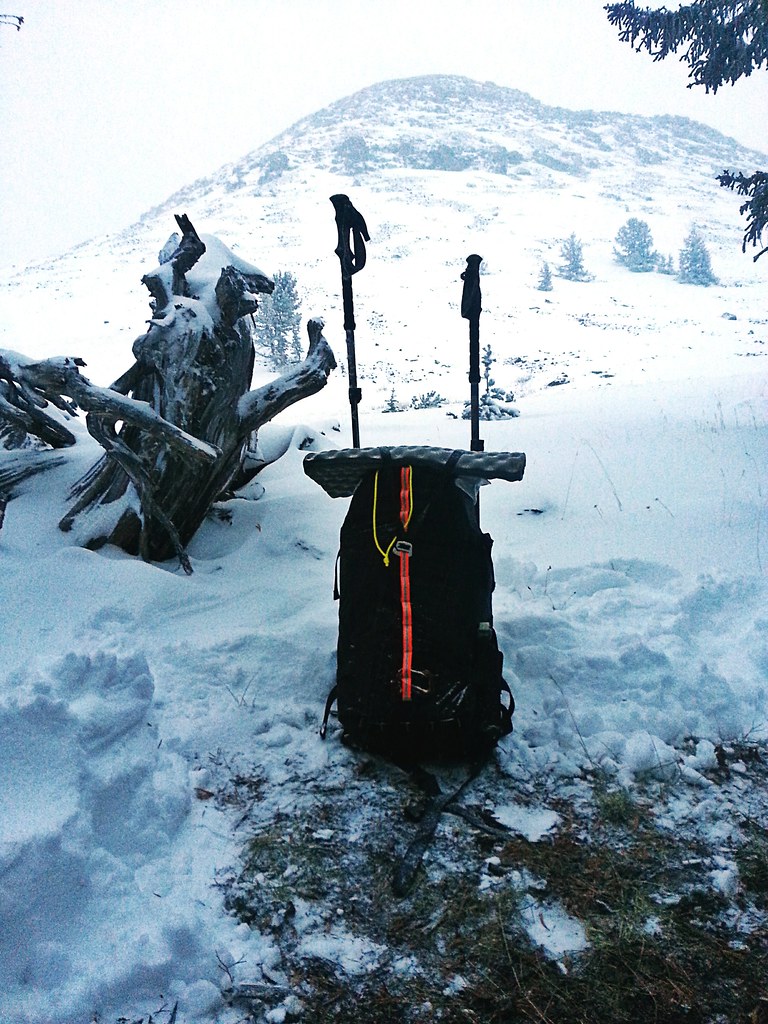 The country I traveled through exquisite. The fresh blanket of nearly a foot of snow hung heavy on the flora and the quietness that comes with such a blanket was silence that is music to my ears. I walked, tripped, slipped, and gracefully glissaded my way downhill keeping a keen eye out for critters. 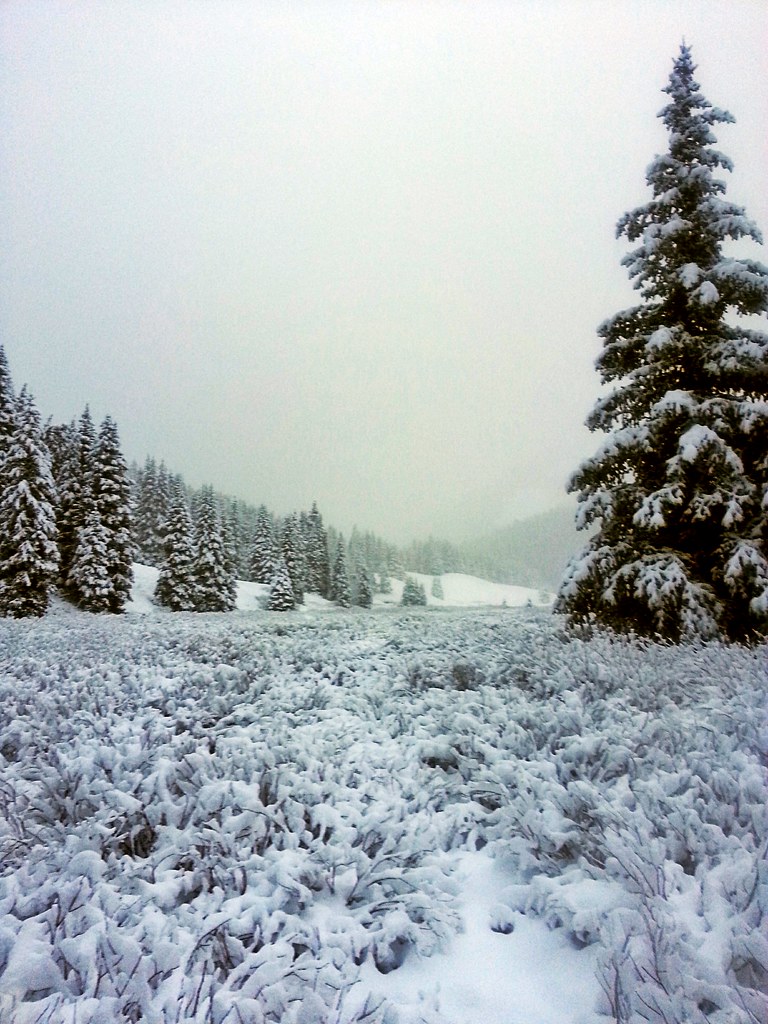 Although my goal was to spot deer on this journey I did not come across any of the species and I may cross it off my list of places to consider coming for a hunt. I did have the glorious treat of coming across a large cow moose standing in a boggy section of the lowlands as I reached the valley bottom off the ridge. She turned and looked at me for a few seconds and nonchalantly walked away behind some trees and then up and off trail into the woods. I am always in awe when I have the chance to view these magnificent creatures.