*Note â€“ this was originally posted as a trip report on Summit PostÂ in 2008, and subsequently as a post to previous version of my website. Â I am re-posting it here for posterity and search-ability. Â Â For all trip photos view the Â Bridger Ridge TraverseÂ albumÂ on Flickr.

Jeff and Sam started at Fairy Lake USFSÂ campground at 07:30 on 2008-08-24 with light packs, lots of food, water, maps and legs ready to be destroyed. We finished, eleven and a half hours later having ascended 5,170 ft and descended 7,460 ft overÂ nineteen miles. 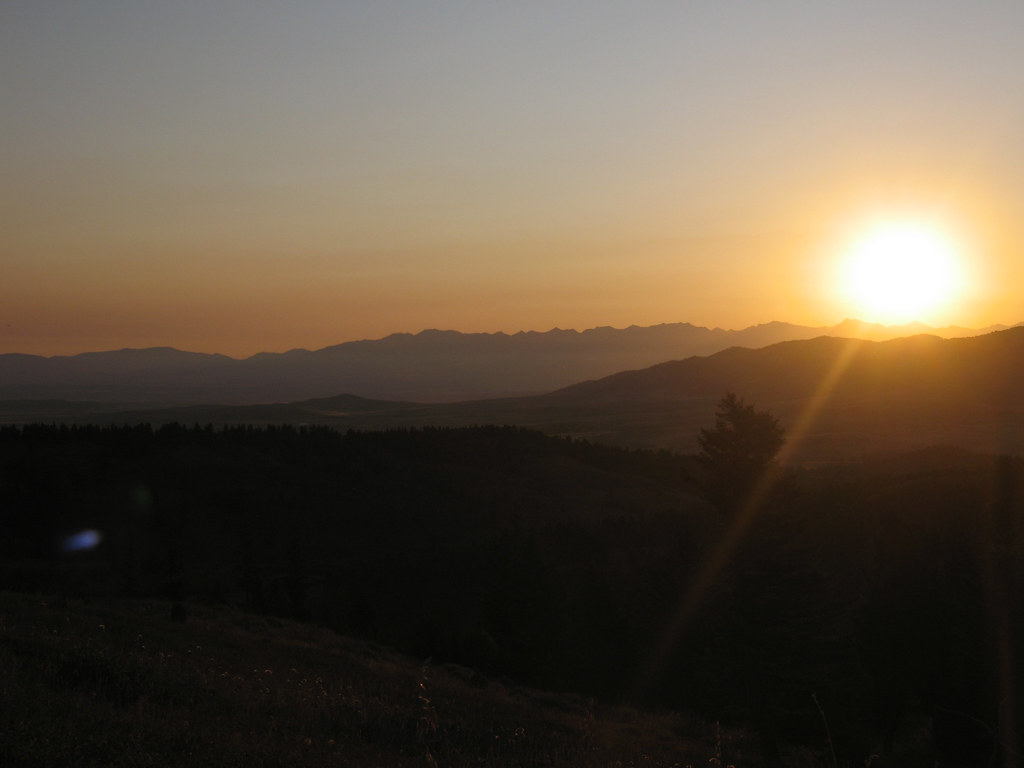 In a passing conversation the week prior to the trip Jeff mentioned his 30th birthday was coming up and that he had a desire to do something meaningful, worthwhile and challenging before his twenties passed. Knowing that Sam was someone who thoroughly enjoyed backpacking, hiking and alpine scrambling he put forth the idea to him as well as some other Bozeman locals. Sam responded with a whole-hearted, hell yes Iâ€™d like to join you and the response from others was a bit milder.

Sam and Jeff both did some independent research of the traverse using such tools as the excellent Bozeman Area topographic map, Google Earth and the Ridge Run maps located at theÂ Big Sky Wind Drinkers Web site. 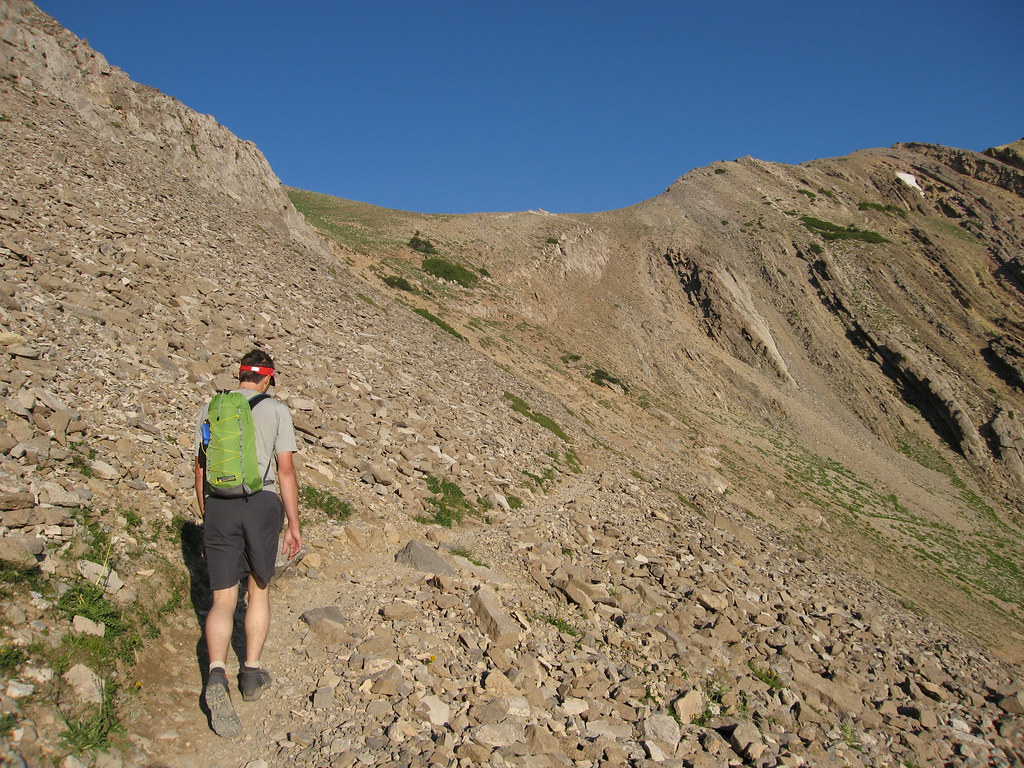 The Hike
Waking at 05:30 on Sunday morning a quick breakfast was consumed and the packs finally loaded. Sam brought Clif bars, salami, cheese, baguette, chocolate and four liters of water. Jeff brought sandwiches, M&Ms and nine and a half liters of water (having miscalculated thinking he was only bringing seven and a half). Driving Samâ€™s Subaru to the Fairy Lake trailhead they quickly hit the trail opting to change the Bridger Run route to their own liking by tacking on a summit ofÂ Hardscrabble Peak to the already big day of travel planned. 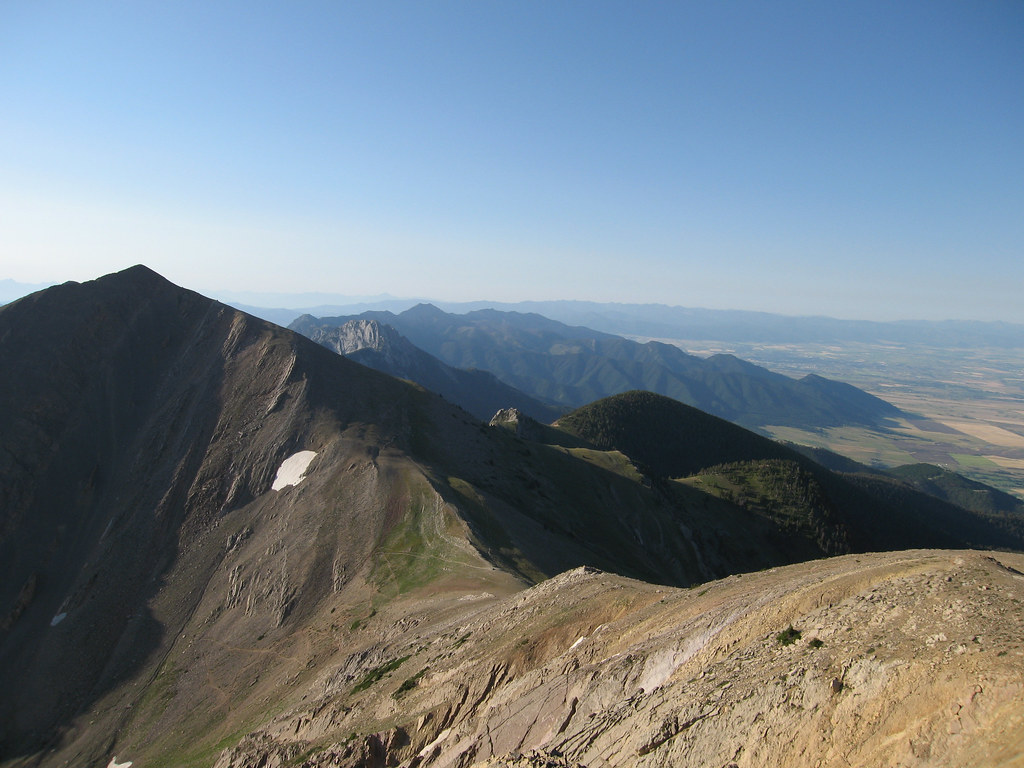 Descending from Hardscrabble the meat of the journey began with a climb of Sacagawea Peak, the high point of the trip at 9,665ft of elevation. A use trail exists along the entirety of the Bridge Range as described in this report but side-steps some of the summits in the range. Opting to bag most of these Sam and Jeff next climbed the few dozen extra feet to the summit of Naya Nuki wherein author Kenneth Thomasma has left a few copies of his novel, Naya Nuki, Shoshone Girl Who Ran, the story of the peakâ€™s namesake. 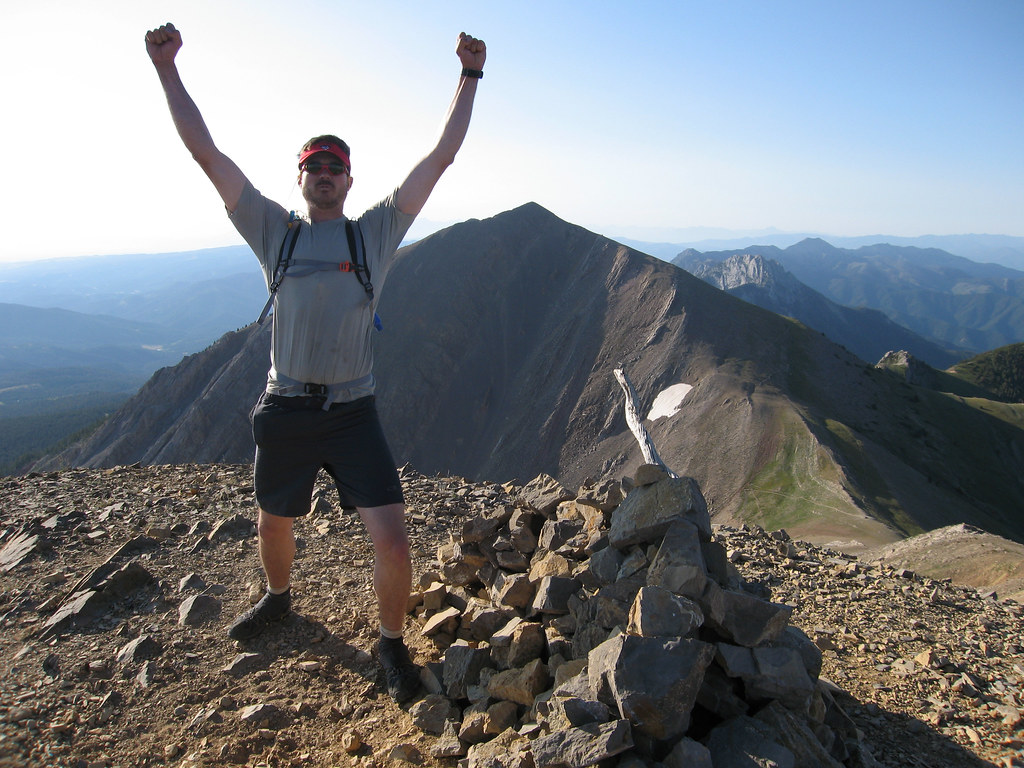 The use trail is excellent for 95% of the route and is the majority of what is traveled in the traverse. The route called for in the Bridger Ridge Run skips a beefy section near Ross Peak which would call for a higher class of scrambling that most are prepared for in a running race. At this point the suggested route is to drop a thousand some odd feet to the National Scenic hiking trail which parallels the Bridger Ridge on the West side. A beautiful trail with excellent tread takes traversers to Ross Pass and then at a well-marked junction (large cairn and two blazes, one paint and one cut) hikers should turn left, head straight uphill on a well-worn use trail back to the summit of the ridge.

The rest of the day was spent hopping rocks, photographing amazing views and calculating mileages and hours. Along the way are great views of many mountain ranges, including theÂ Crazy Mountains, Madison Range, Absaroka Range, Beartooth Range, Gallatin Range, and the Tobacco Root Mountains.

Other named peaks that are ticked off while hiking this traverse are Saddle Peak, Bridger Peak and Baldy Mountain. 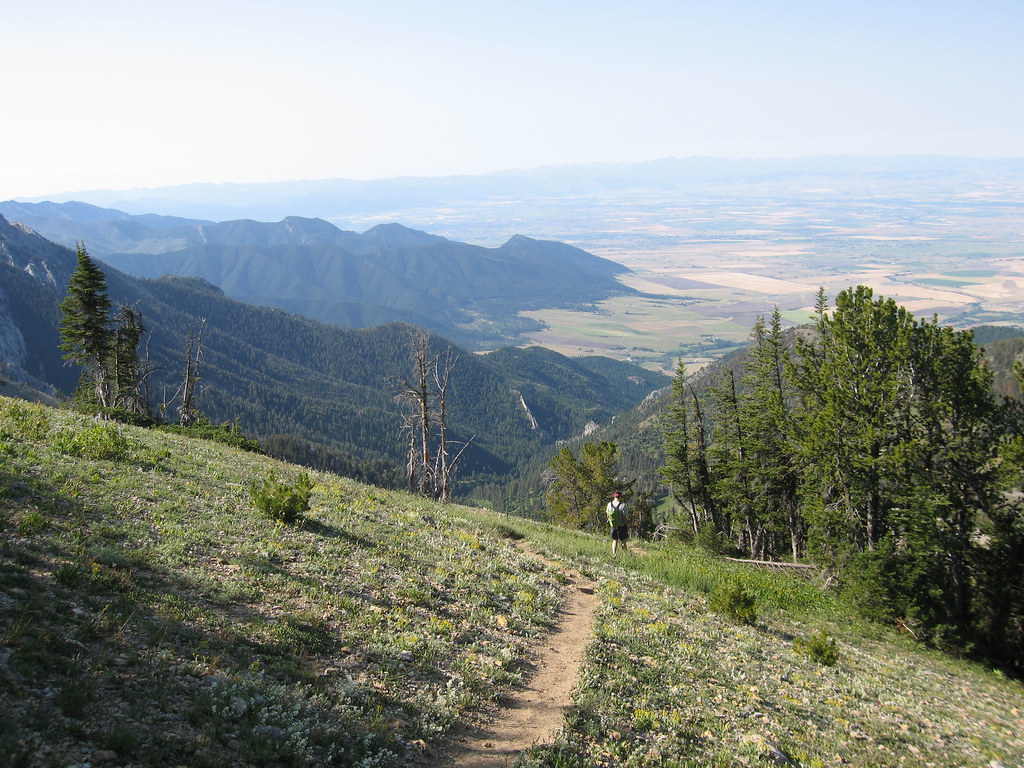 Descending from Baldy Mountain to the Bozeman area â€œMâ€ trail is a knee-pounding affair nearly straight down a few thousand some odd feet. After a grueling day in the sun, hiking on scree and rock it took itâ€™s toll on Jeff and Samâ€™s knees. We met Jeffâ€™s wife Shannon at the â€œMâ€ and finshed at the â€œMâ€ trailhead to shuttle back to Fairy Lake to fetch Samâ€™s vehicle. 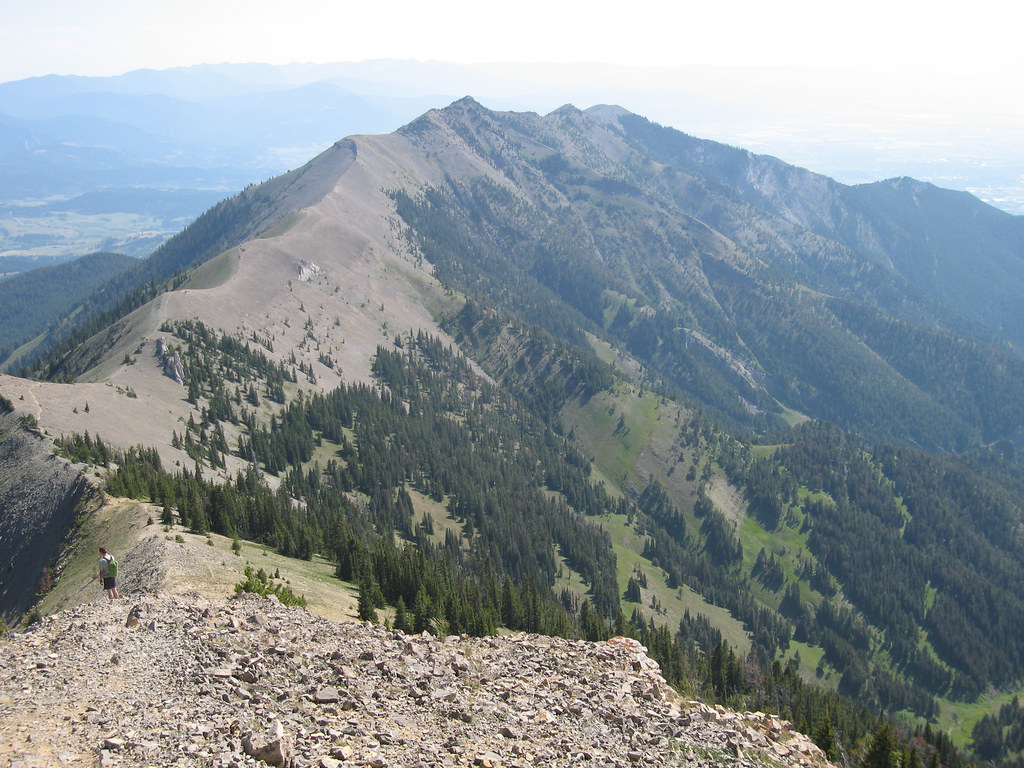 Conclusions
Having hiked this partial section of the Bridger Range Traverse both Sam and Jeff would like to complete the remaining section from Flathead Pass southward to Hardscrabble.

Worthy of mention is the common thread on various Internet resources that the route is hard to follow and both Sam and Jeff agree that these statements are false. With minimal route-finding skills and keeping oneâ€™s eyes open anyone with the physical capabilities for big miles and big elevations should have little to no difficulty in completing this traverse. 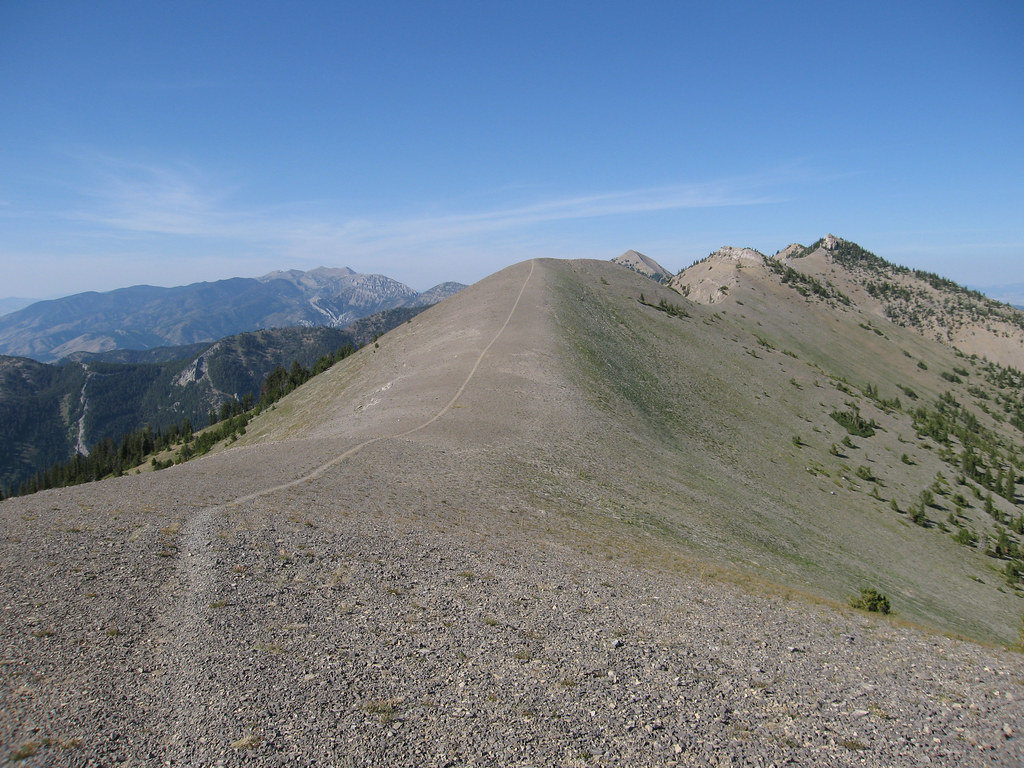