Quality Bicycle Products supplied my favorite local shop, Bangtail Bikes with a couple demo snowbikes recently.  Mike and I have taken them out on three separate occasions and put roughly fifteen miles on them.

The first rig is a Surly Pugsley: The second rig is the newly released Salsa Mukluk: Both rides are equipped with Surly tires.  These tires are inflated to an amazingly low six p.s.i. of pressure and are sized at 3.8 in. (9.65 cm) wide.  The flotation from these things is spectacular for riding on snow or sand. It’s no doubt that a number of the readers of this blog are familiar with the Pugsley snowbike; probably having heard either directly or offhandedly in their use along “The Lost Coast”, Iditabike, or the Arrowhead 135.  The Salsa Mukluk frameset is new and doesn’t yet have the same badass reputation as the Pugsley.  Cyclists are stoked about it however because it differs from the Pugsley in that the wheels aren’t offset from center making for a slightly smoother turning action.  Personally I don’t mind the offset because most of the usage of these bikes are at relatively slow speeds on highly-diverse terrain not making the offset as noticeable as it would be at speed on asphalt. I first rode a Pugsley in 2009 while visiting family in Minnesota.  My brother and I took them out for a trail ride in the popular mountain biking destination, Theodore Wirth Park in Minneapolis.  The riding on a packed snow trail is excellent and rivals summertime singletrack riding.  That evening after the trail riding we sessioned the bikes for a couple hours jibbing on snowbanks for a few hours.

This past weekend Mike and I took the Pugsley and Mukluk to the Chestnut Mountain trailhead near Bozeman and were able to ride them about 1.5 miles up the trail before the amount of foot traffic had lessened enough to not provide an adequate riding surface.  Riding back down the 1.5 miles was exhilarating.  There’s little scarier than having both front and rear disc brakes locked up as you and your bike slide left and right along a steep switchback section of trail. 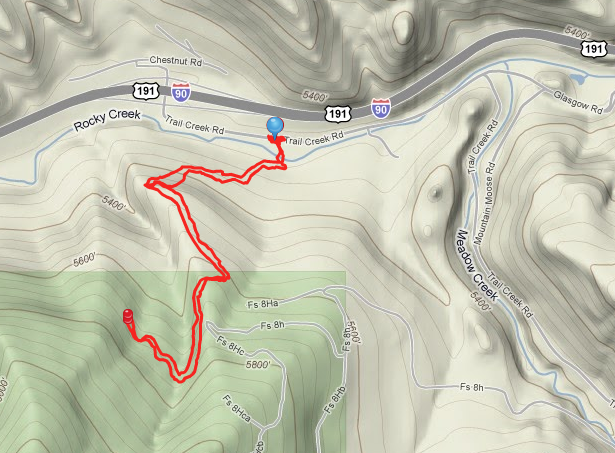 View an interactive map of our route on Chestnut Mountain at Everytrail.com.